The Filipino community in Adelaide will be celebrating when Pinoy Street Party kicks off at Nexus Arts on Friday 29 October as part of this year’s OzAsia Festival.

The party is set to showcase the creative expressions of the best Filipino singers, dancers, rappers, storytellers, DJs and musicians from Darwin and Adelaide.

James Mangohig, also known as Kuya James, lives in Darwin on Larrakia Land and is the visionary behind Pinoy Street Party.

What does Pinoy mean? Pinoy refers to all people of Filipino descent.

Starting out as a bass player for numerous bands, James developed a passion for music production after discovering the Latin American hip hop group Cypress Hill, and African American artists Snoop Dogg and Dr Dre in the early 90s. They were all pioneers back then, making their mark in the American music industry, taking creative expression to another level and inspiring youth of all nationalities around the world.

“For the last 20 years I have been working a lot with the Indigenous label called Skinnyfish Music. I realised very quickly I wanted to get into beats and producing music and that led to me DJ’ing which is a small part of what I do. It is the easiest way to express music created in the studio.” 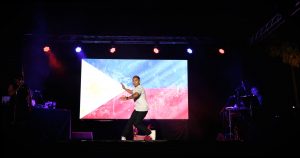 “As I entered the Australian music scene, I felt like an outsider. My life changed when I saw Quan from Regurgitator on a festival stage and it was the first time I thought that people like me had a place in our music culture. The same thing happened watching DJ Dexter killing it behind the decks with The Avalanches and then finding out he was a fellow Filipino,” said James. (from an interview published on Livewire)

Australian producer and DJ, Kuya James, has a natural ear for music.

Kuya James is passionate about representing the artistic expression of artists from diverse cultural backgrounds. He wants their voices to be heard.

“The Kuya James project is turning out to be one of the best new offerings … This might be a new project but once you hear it you’ll know Kuya James is far from new to the game. The production, sounds, layers and flavours here are courtesy of a total pro.”

Kuya James put together Pinoy Street Party by selecting artists for the Darwin Festival last year. About meeting other like minded musicians, he said:

“I love meeting other Filipinos and any other Asian creatives and am passionate about the way we come together to express our creative energies in music.

“Perhaps, like me, they’ve grown up between two worlds and have to navigate those worlds. One of my passions is to engage with those artists.”

This year, as part of OzAsia Festival, there are artists from Darwin performing alongside local artists from Adelaide.

“I came across an amazing singer in Adelaide called Brian Ruiz.”

“He does a lot of gigs throughout the pub circuit. He performs at corporate gigs but he hasn’t performed in front of the Filipino community. This is a great way to showcase him as an artist “ Emcille Wills is also an exciting artist that Kuya James is working with and bringing to Adelaide for Pinoy Street Party.

“We are working on a debut album at the moment and she has become one of the feature parts of my Kuya James show.” Interestingly, Emcille is also the President of the Filipino Australian Association of the Northern Territory (FAANT).

The organisation runs events like the popular Barrio Fiesta, the annual Philippine Independence Day celebrations and the festive PASKO (Christmas) celebrations to unite the 7,000-strong Filipino community in Darwin.

As a music producer, this is something that Kuya James can identify quickly in people.

“I meet people at a cultural level. We’re connecting, we’re eating, we’re talking but through this I’m like, you’ve got a fire burning inside you and you’ve got a story to tell.”

After years of collaboration, Kuya James’s debut album ISA was released on September 25, 2020, through local Darwin independent label Settle Down Records. Isa means ‘One’ in Tagalog. Click here to read more on his debut Album ISA

On the importance of language in music, Kuya James explains:

“Interestingly, Emcille and my Tatay (father) both speak Cebuano.”

Cebuano is a widely spoken dialect of the Visayan language.

“On my feature album, there is a song called ISA and Emcille raps in Cebuano and it’s incredible. What’s fascinating to me is the type of rap, in that language, has not been put out before.” 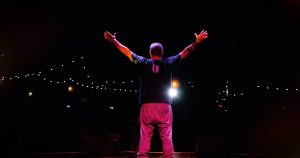 To add to his credits, the Australian Music Industry has acknowledged Kuya James with a recent nomination at the ARIA Awards 2021 for his album ISA under the category of  Best World Music Album.

“It’s a great honour to be acknowledged for my work as a music producer and artist in this way. I feel world music has always been an interesting and at times controversial category so my hope is that from being part of the albums nominated, we can broaden our thinking of what “world music” really is,” said Kuya James.

The ARIA awards will be broadcast on 24 November 2021.

“I was born in Adelaide, actually, and moved to Darwin when I was five,” said James.

“My father is Filipino and my mother is an Australian-born Dutch woman.”

“In those early years my Lola, my grandmother, came over from the Philippines as part of the extended family.”

Coming from the tropical surrounds of Southern Philippines, the cold weather in Adelaide was too much for his grandmother to bear.

“Dad looked at the map of the equator. Darwin was the same distance to the equator as his village in the South of the Philippines.”

“He had this amazing insight to move to Darwin when I was five years old.”

Of the 7,640 islands in the Philippines, his father originates from Tupi, South Cotabato on the island of Mindanao.

Kuya James celebrates his diverse Asian and European cultural influences and appreciates living the best of both worlds.

His favourite dish is the mouth-watering Chicken Adobo especially cooked by his Tatay, father.

“I love how multicultural we are as a nation.”

“I also appreciate our Indigenous brothers and sisters. There are some incredibly talented artists I am working with.”

Kuya James has a signature look. His cap and goatee.

He has the charismatic presence of a music producer.

His unique Filipino and Dutch ancestry have blessed him with good looks and his laid-back Aussie accent and down-to-earth vibe only adds to his allure. He explains:

“I am Australian at heart. I am a Northern Territory boy and blessed to have all the cultures around me.”

And almost as if Kuya James was promoting the Northern Territory, he affirms the simple truth:

“I’m not sure if you have been to the Northern Territory. It really is an amazing place.”

As a young boy, James would travel back to his family home in the Philippines every two or three years.

“A lot of my early influences came from me going to the village and hanging out with my family. I would check my privilege. The experiences opened my mind. My father raised us to not be entitled and to appreciate how lucky we were.”

“I think that greatly influenced me in many ways, not just musically, but in a way that I watched the family share everything and be part of a community. They looked after each other and laughed, even when there was no money. It really captivated me.”

It wasn’t until he was 14-years-old and his father, a preacher, started a church in Darwin where James connected with the Filipino community, including musicians.

“I met some Filipino musicians who helped in getting the first church band together. That’s when I was inspired to get a bass guitar and learn to play. I think I was 14 or 15 years old. I got to jam with great musicians who were Filipino and performed gospel music, soul music and some cheesy Filipino ballads. Filipinos are quite emotional and feeling music is important. I understood that.” When he set out on the path of a pursuing a solo record, James was looking for a name that represented himself as an artist.

“Kuya, means ‘older brother’ in Tagalog. It’s a name that a lot of people have called me over the years. The name just felt right.

“I am forever grateful to my parents for making sure that our house, growing up, had influences from both my Filipino and Dutch roots.”

And when asked what sports he loves, anticipating him to say basketball, Kuya James throws me a curveball by saying:

“In Darwin, we are a very sports-focused place. My brothers both play rugby. All my friends love football because I work with a lot of Indigenous people as well. I follow a little bit of everything just to stay with the vibe.  I enjoy competitive sports. I think it’s fun.”

He also loves everything about Christmas and, together with Jesse Vicencio, produced and featured the Christmas song by Filipino-Australian artist JP called Ngayong Pasko Click below to listen.

Pinoy Street Party will showcase a mix of old and new songs from the Philippines to bring together the older generation and a night of hip hop, remixes and tribal beats, for the younger generation.

Reflecting on his music and culture he said:

“Music is what connects me to my roots.”

Kuya James reveals that some of the songs from his debut album ISA will be performed at OzAsia Festival.

Caiti Baker is his partner and travels with him. He is respectful and full of praises for the lady that shares his life.

“What’s amazing is that culturally, she is a white Australian lady and has been instrumental for me connecting with my community.

“She is such a phenomenal singer in her own right. She is supporting Jessica Mauboy on her national tour next year.

“She mentors some of the Filipino singers and is becoming an essential part of the work we do.”

Check out another single – a love letter to Darwin called Rewind Our Love by Caiti Baker.

What can we expect at OzAsia Festival when Pinoy Street Party comes alive? 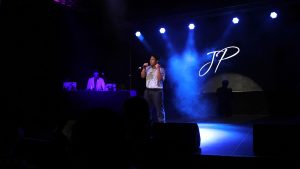 Kuya James is inviting everyone who appreciates music to the party, including the Filipino community in Adelaide and around Australia.

“It’s been tough during COVID-19 but we are looking to unite and celebrate.

“I am calling out to all the Filipinos. The Filipinos know how to party, and with local street food and entertainment for the whole family it will be a joyous celebration of culture and heritage.

To get down with the Pinoy Street Party and catch Kuya James in action, book now.

Organisers are ensuring that all health and safety guidelines are being followed to ensure a COVID Safe event. Click here to view the COVID Safe updates and FAQ’s.

Related stories: Jason Chong is ready to entertain at the OzAsia Festival.