Amazing & historic scenes at the US Open as the world #150, 18-year-old unseeded schoolgirl Emma Radacanu, became the first British woman in 44 years to win a grand slam event.

So moved was Queen Elizabeth II, she sent a rare congratulatory note to acknowledge her achievement – not dropping a set, her composure & beaming smile throughout.

Being the first British women’s player to win a grand slam since Virginia Wade won Wimbledon in 1977, created a particularly moving moment, with Radacanu making a special acknowledgment of Wade who was in attendance.

Emma’s story is one of diversity, migration, hard work & the unleashing of the possibility of global citizenship. She proudly identifies as British but acknowledges her cultural heritage, born in Canada to Romanian & Chinese parents before moving to London at age 2.

Just a few months previously, Emma was finishing her A-levels, securing an A in economics and an A+ in maths and she credits the influence of her migrant parents to her stunning and unprecedented success:

“Mum, Dad, thank you to everyone. This one’s for you guys.”

She was widely praised for her on court demeanour and resilience which she says is inherited:

“My parents have both instilled in me from a very young age to definitely have a positive attitude on court.”

Her Chinese mother Renee who is originally from Shenyang, got a special mention as a shaping force:

“I think for me, having a Chinese mum, she definitely instilled from a young age hard work, discipline and confidence from inner belief. It’s not about telling everyone how good you are, but it’s about believing it within yourself.” 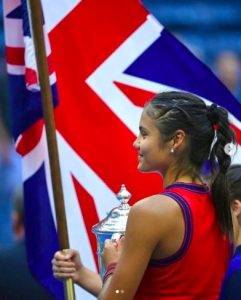 Emma etched her name in the history books as the first unseeded player to win in the Open era, the youngest US Open champion since Serena Williams in 1999 & the first US Open women’s champion not to drop a set since Williams in 2014.

Journalists and ex players across the world struggled to explain Emma’s calmness under pressure, which was amplified after some critics labelled her a ‘choker’ after withdrawing from Wimbledon earlier this year with breathing difficulties and anxiety.

British Commentator and former Wimbledon champion Tim Henman, said: “I’m shaking, my legs are like jelly. I cannot believe the resilience, how tough she was, the quality of tennis.”

The BBC’s Josh Bennett wrote: “Emma Raducanu is truly astonishing. No fear whatsoever. Whipping up the crowd now too. So entertaining to watch. It’s like she’s been a top player for years but hardly anyone had heard of her 4 months ago”.

The New York Times’ Ben Rothenberg said: “This is the most absurd tournament anyone has ever had, let’s be real.”

But it was English actor, writer, broadcaster and comedian Stephen Fry who summed it up best: “What a glorious day. Yes, it may be ‘only’ sport, but in that ‘only’ there can be found so much of human joy, despair, glory, disappointment, wonder and hope.”

“A brief flicker of light in a dark world.”