Part 5 of a CulturalPulse 5-part series on Lunar New Year highlighting the beauty of the lantern festival.

Part 5 – Its the Lantern Festival!

The Lantern Festival or Yuan Xiao Festival (元宵节 yuán xiāo jié) falls on the fifteenth day of the first Lunar month and marks the end of the Spring Festival .

The Lantern Festival goes back as early as 2,000 years ago, during the Han Dynasty (202 BC – 220 AD) when Buddhism had been introduced into China.

Traditionally the lanterns were lit up to pay tribute to gods for good fortune.

When the the Emperor Lio Zhuang, a Buddhist, was aware of the custom of monks to light lanterns to worship Buddha on the 15th day of the first lunar month, he officially decreed that all palaces and temples feature lanterns, and people right across the country should hang lanterns, essentially creating the annual tradition of lantern displays.

The paper lanterns were originally used as lamps in the palaces.

During the Tang Dynasty (618 – 907 AD), people made lanterns to celebrate their prosperity. 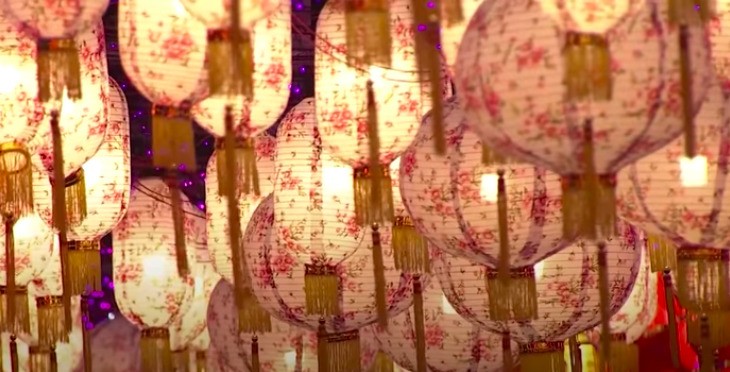 Whilst the history and significance of lanterns has changed over thousands of years, the red lanterns are still in demand and today.

A staggering 80% of the worlds demand for red lanterns are manufactured in a village called  Tuntou of the Gaocheng District in Shijiazhuang City, north China’s Hebei Province and just 2 hours out of Beijing.

Interestingly, the Hebei Province is home to the Chengde Mountain Resort and the imperial summer residence of the Qing-dynasty emperors.

“At the end of the Lunar New Year celebrations, I always enjoyed watching the lanterns lit up across the park and the atmosphere with all the people. I enjoyed the conversations and laughter with my family and friends. We would look to the moon and wish for a great start to the new year. ”

Tang Yuan (汤圆 tāng yuan), also called as Yuan Xiao (元宵 yuán xiāo), is the trademark food of the Lantern Festival. Shaped like a round ball, Tang Yuan symbolizes the full moon and people’s desires for happiness and family reunions. The Lunar New Year Festival is one of the largest and longest celebrations in the world.

Over fifteen days, it highlights the rituals like the annual gathering of family members from around the world for the reunion dinner, the worshipping of gods to ward off evil spirits and the honouring the ancestors.

It focusses on the wishing of good fortune and prosperity to others which includes the passing down of the ‘red packets’ from the older generation to the younger generation.

It showcases the rich culinary diversity in regional cuisines from Peking duck to Shandong chicken, Rice cakes to Dumplings.

It looks back at the legend of ‘Nian’, the traditional roots of lion and dragon dancing performed by skilled martial artists and fireworks as a way to evil spirits and bring in good spirits.

Finally, on the fifteenth day, it finishes off with the enjoying ‘ Tang yuan’ and the Lantern Festival that originated back in the Han Dynasty  as a tribute to the gods and was inspired by ancient Buddhist monks into an annual tradition that marks the end of the Spring Festival.

“We do visit the Buddhist temples occasionally but due to the nature of the pandemic and and how it has impacted Queensland, Australia and the world, we will be cautious this year and adhere to the guidelines. We will light the incense and pray for good fortune from our home.” He adds.

Check out the China Global TV Network (CGTN’s) Lantern Festival – It’s all about the lamps.

Lunar New Year is one of the largest festivals in the world, spanning 15-days and celebrated in China, South Korea, Vietnam and in East Asian diaspora communities across the world.

Keen to learn more or reach the 1.4 million strong Chinese community in Australia or other Asian markets in Australia? Contact our team at [email protected]