Jason Chong is ready to entertain at the OzAsia Festival.

Home > Adelaide  > Jason Chong is ready to entertain at the OzAsia Festival. Jason Chong is ready to entertain at the OzAsia Festival.

Adelaide’s own Jason Chong is ready to entertain audiences with his unique brand of Aussie humour alongside a line-up of the best Asian Australian comedians to appear on one stage.

The Special Comedy Comedy Special is a one night only experience on Saturday 30 October 2021 at 7.30pm at Her Majesty’s Theatre in Adelaide as part of this year’s OzAsia Festival.

Jason has been performing since 2001 and working in radio since 2005.

His razor-sharp wit and intelligent humour made him a standout in the early years.

That acknowledgement set him on a path of success with opportunities to represent his home town and city of Adelaide as well as his country.

His TV appearances have included Channel Ten’s The Project and the Comedy Channel’s The Mansion.

He is authentically Australian with Asian sensibilities. 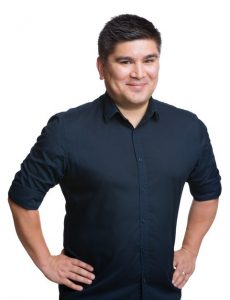 Born in Adelaide, Jason was raised in the seaside suburb of Brighton and the southern Adelaide suburb of Hallet Cove by his Australian mother and his Singaporean-Chinese father.

When asked what he loves most about Australian culture Jason responds:

Even though his father’s family settled in Singapore, his ancestry traces all the way back to the Hakka region in Southern China where his grandparents were originally from.

When exploring the Hakka origins through the internet Jason came across images of the traditional Chinese bamboo hats, also referred to as Liangmo, worn by Hakka women.

He is quick to remind that Hakka is spelt with two ‘k’s otherwise you might be reading about the New Zealand Haka.

“I don’t know why, but it looks so cool. In all of the photos I have seen, it’s the Chinese ladies with storied faces that are generally wearing one. The hats have what looks like a theatre curtain that wraps all the way around. I really want one,” said Jason.

“The ‘Hakka’ hats are the Chinese equivalent of the Aussie ‘Akubra’ hat with the corks hanging all the way around,” added Jason.

His father first came to Adelaide, Australia to study as an international student and encouraged his family members from Singapore to settle there. Jason recounted the fond memories with his family:

“They were all here. Whilst some members of the family returned back to Singapore, the others stayed. We’re all very close. I’m very lucky I have an immigrant parent but also a close-knit family. We all lived five minutes away from each other.”

After his parent’s divorce, he would spend the weekends with his father and his father’s friends who were all Asian.

Jason’s favourite aspects of Chinese culture is food, especially the rich and diverse flavours of the Chinese cuisine.

“My favourite dish has to be Hainanese Chicken Rice.”

He also loves the age-old tradition of Hong bao where the older members of the family would gift money in red packets to the younger members and wish them good fortune.

This was especially a treat during the auspicious Lunar New Year celebrations.

When asked who his inspiration was growing up, Jason responds:

‘Santo Cilauro was my inspiration growing up. Everyone had their favourite comedian and Santo was my favourite. He was the proud Italian, the ethnic of the group. He was the older comedian with his own unique brand of humour that was self-deprecating.”

“In my mind, Santo was really a pioneer in the space.”

“He was also a cameraman for The Working Dog for many years and he filmed the movie The Castle. I really liked that.”

A Family of Filmmakers

And just like his early inspiration, Jason is not only a comedian but also a filmmaker.

He discovered only later that his family back in Singapore owned one of the largest Cantonese-speaking film production companies, during the sixties and seventies, called “Kong Ngee.’

“My grandmother’s family were the Directors of the company, Kong Ngee, and my grandfather became the Secretary. They had a cinema that my dad and uncles grew up around and they made movies.”

When Jason told his father that he wanted to go to film school, his father didn’t bring it up at that time, and only mentioned it later:

“You do remember… you do know that your family owned a film studio?”

Jason beams while recounting the legendary story of the film studio and the family’s secret shame.

They once turned down a young man for a movie role who later went on to become the world-famous actor, the much-loved Bruce Lee, known around the world for his on-screen martial arts prowess. Although Bruce Lee (1940-1973) was born in the United States, he grew up in Hong Kong, and appeared in numerous films there as a youth.

A career in Comedy

When Jason decided to pursue a professional career in comedy, his father shared some of the reservations of many Asian parents.  Jason explains:

“In Chinese culture, you are very strongly encouraged to become a lawyer and doctor and get a proper job and a proper income.”

“Dad would say things like, when are you going to get a real job? Why are you not on TV yet?”

“But the truth was, Dad was very funny as well, so I think he didn’t really mind as long as I was happy.” When asked what he finds the most challenging about being a comedian, Jason responds thoughtfully:

“Comedy is my community but the reality is it’s a solo act and art form. That can be a solitary experience and challenging at times.”

And when asked what he believes is the most rewarding experience as a comedian, Jason responds with confidence:

“In comedy, you have all those possibilities out there and that is very energising. It’s not the same every time.  I think that’s what I love most about my craft.” Jason was the host of Read the Room, a game show at the 2019 Adelaide Fringe Festival.

When asked about Russell Peters, a popular Canadian Indian comedian known around the world, Jason says:

“My Dad actually introduced me to Russell Peters back in the day, before YouTube, when people would just send video clips through email.”

“I do love Russell Peters. I have never seen him at a live show.”

“He once came here to Adelaide but it was a secret show. Somehow all of my Asian friends knew about it and I didn’t.”

When asked who his favourite comedians are, Jason’s face lights up as he explains:

He tells the tale of Ronny Chieng’s incredible rise to Netflix fame.

“Ronny Chieng is someone who I just loved watching. When I was in Melbourne I was doing shows with him and he was just another young, meek Asian comic. I didn’t see him for two weeks and all of a sudden, he had the bravado of a New York hustler, gambler kind of guy which has just been amazing and that people have gravitated towards. I really love his special. You can see it on Netflix.”

Reconnecting with family in Singapore

Jason’s career highlights to-date include being invited to perform at the Singapore Comedy Festival alongside other Australian comedians.

As a professional comedian, representing Australia Internationally, there were just a few boxes that Jason wanted ticked off.

“My family living in Singapore came along to the show. That was a great experience.”

“And when the Singaporeans laughed that was a bonus otherwise it would have been a long flight back home,” said Jason.

Within a year Jason was called back to perform in Singapore again with the dates falling around the time of his cousin’s wedding.

“I was already planning to go to Singapore for the wedding and added an extra week for the Comedy Festival appearance.”

“It also coincided with the anniversary of my Dad’s birthday and he had recently passed away.”

For the most part of his life the connection to Singapore was through his father, his grandparents and his family. They had all provided a richness in life experiences for the young boy growing up in Adelaide. It was almost a fitting tribute for Jason to repay that honour back in some small way.

“To commemorate Dad’s birthday, I made a special visit to two places that I knew he had grown up around. The first one was The Metropol Theatre.”

The Metropole Theatre first opened in 1958, and closed as a cinema in 1986, and has now transformed into a Church.

“The second one was to the old family home, a large mansion, that used to exist just off Orchard Road in Singapore. I eventually found the location of the house, where Dad used to live, and with land in Singapore a premium, the original family home is now replaced by modern high rises. Orchard Rd is the famous shopping precinct in Singapore.

“I also indulged in my father’s favourite style of noodles, Char Kway Teow.”

When asked about his upcoming OzAsia Festival performance at Her Majesty’s Theatre, Jason responds proudly:

“I’ve been lucky enough to perform at Her Majesty’s Theatre twice before. It really is a unique experience”

The contest was organised especially for the international students, who could not head back to their families for the summer break, due to the impact of COVID-19.

“It was really awesome to see the students performing traditional Asian songs and then belting out Lady Gaga,” added Jason.

What does the one night only experience of comedy offer? Jason Chong is quick off the blocks when responding:

“After the impact of COVID-19, I can’t wait to connect with the audience and make people laugh.”

“I am extremely grateful that the richness of diverse comedians is being showcased at such an iconic venue.”

“I want to see the whole show and hang out with all the people involved. A big thank you to Adelaide Festival Centre and OzAsia Festival.”

Organisers are ensuring that all health and safety guidelines are being followed to ensure a COVID Safe event. Click here to view the COVID Safe updates and FAQ’s.