India Republic Day honours the historic moment in which India adopted its constitution at midnight 26 January, 1950, completing India’s journey to becoming a sovereign republic with a democratic government system.

The date January 26 has major historical significance and on that day in 1929, ‘Poorna Swaraj’ or complete self-rule was declared by the Indian National Congress, the occasion historically marked by Jawaharlal Nehru hoisting the Indian tricolour flag on the banks of the Ravi river amidst cheers and jubilation. 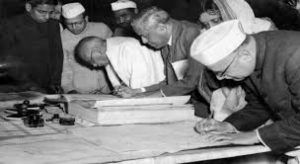 In the modern era, the celebrations are highlighted by the awarding of the annual ‘Padma’ awards to Indian citizens, a major military march in Rajpath in Delhi and a grand parade representing India’s rich diversity and cultural heritage.

Since Republic Day 1950, India has made great progress with notable achievements in a number of global industries including manufacturing, space, defence, sports and  tourism through which its rich cultural heritage is proudly showcased to the world.

In 2021, the world’s largest democracy marks its 72nd Republic Day, celebrated not only among its 1.3 billion citizens as a national holiday but also by its 18 million global diaspora.

Representatives from the Consulate General of India in Sydney, Australia, are proud of its community’s joint celebration:

“On behalf of people of India, the Consulate General of India would like to wish every one a Happy Republic Day! The contributions of the Indian Australian community is a great source of pride for us. We share this momentous date with Australia Day.” This year, due to ongoing COVID-19 pandemic restrictions the Consulate General of India, Sydney are celebrating this event which will be broadcast live on Facebook with details as follows: